FIVE STARTUPS TO WATCH CLOSELY IN 2015

2014 was a great year for Latin American entrepreneurs. While Silicon Valley remains a mecca in which all look to learn the latest in innovation, and the search for resources to fund us, our region offers increasingly better projects and teams who are encouraged to innovate themselves, as well as greater opportunities and respect for the global community.

That’s why, at the beginning of the year, we chose five Startups born in Latin America, targeting different markets and designed in totally different ways that are very promising for 2015. Founded by the Ecuadorian Raul Moreno and Argentinean Alejandro Estrada, co-founder of DineroMail, this Startup has various features that make it unique. Conceived initially as an iOS application, iBillionaire´s was created to help small investors compare their portfolios with billionaires like Warren Buffet and George Soros who, according to Moreno´s premise, often make better decisions and beat the most popular investment funds. This in itself made the company win over a lot of media coverage as well as making it a major success in the United States. However, during the last year the project evolved, and with it so did their goals and business model.

While initially the intention of the company was sustained through a freemium model, to access certain features of the application required a paid subscription. The model evolved to make the App a means to attract investors to iBillionaire´s own ETF based on thirty billionaire´s portfolio (for the English meaning of the word) to draw investors wishing to place 20 to 30,000 US dollars.

An ETF is an investment fund that can come and go at any time and that is listed on the stock exchange, as if it were an action.

The ETF iBillionaire´s is under approval and is expected to become operational in 2015, thus it is worth following the future of this company. This small independent studio founded in Mexico in 2012 embodies, in a way, every entrepreneur’s dream: to use their own talents and resources to create a great product that achieves success and recognition. And that’s exactly what happened with “Celleste”, the first game released by this startup which was selected by Apple’s AppStore as one of the best games of 2014, along with Boom Beach, FIFA 15 and Farmville 2, among others.

This game, only available for iOS, allows one to take control of various forces of the universe and of natural events, such as meteorites and the void of space phenomena, in order to help a group of alien cows to move between different planets and thereby protect them from danger.

What makes Elevator Games so interesting, beyond the enormous talent shown by his small team developing Celleste, is the fact that from its beginnings they did not receive any support of any mentor or investment institution. In fact, their entire team worked for two years while holding other jobs, investing their own money and time without receiving a salary.

Already established as a company, gaining reputation while also making a turn over, they intend to launch new games for 2015, so it is worth being aware of everything they do. 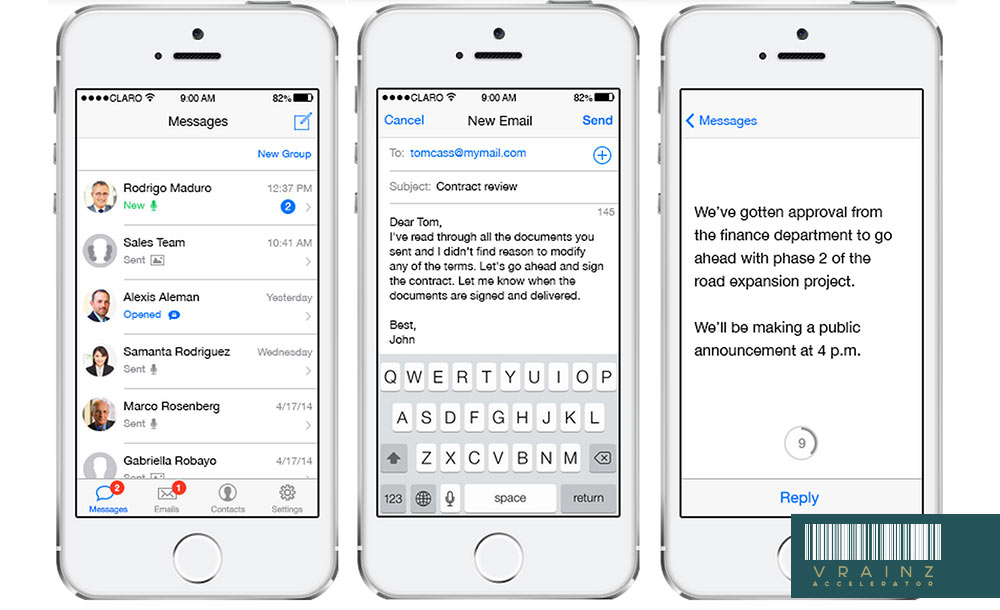 In a world marked by Edward Snowden’s revelations about the massive espionage of intelligence agencies, and in which large companies like Sony are victims of cyber attacks, it is logical that an increasingly promising market for security applications has begun to emerge.  Criptext, one of the most promising Latin American Startups 2015, is more than aware of it.

Created by Mayer Mizrachi and his team, this Startup seeks to dethrone BlackBerry Messenger as the messaging application of choice for companies and governments. The key is to apply all kinds of protections to shared information. On the one hand, the messages are encrypted and self-destruct fifteen seconds after being received. In addition, messages never show information about the issuer, so even if they are intercepted or taken a screenshot, it is impossible to prove from whom they come from. Designed for large organizations, Criptext must be installed on client’s own servers, and allows the IT department to have complete control over its members.

With only a few months in the market, this application already secured contracts with large customers, including a Regional Government, so it is advisable to remain aware of what they will be doing in 2015. This Argentinian Startup founded by Emiliano Kargieman, embodies one of the most ambitious projects in the entrepreneurial world: to reinvent the TV. Founded in 2010 -after the passing of its founder through the Singularity University- Satellogic plans to launch small satellites which are the size of a hard disk into space, and place them in a low orbit, allowing to take pictures of anywhere in the world in HD instantaneously.

This is useful for such diverse tasks as agricultural production, security, and energy production.

This objective, that may sound far away from reach, actually it is not that far. The company, which has already raised $ 4.5 million in investment, launched its first satellite called “Tita” and plans to launch ten to fifteen this year. Keep yourself quite close in following their progress during 2015.

Another application of Argentine origin is BitPagos, a mobile payment processor that allows Bitcoin to receive payments from anywhere in the world. Created with commerce and mobile transactions in mind, this application is distinguished from other services by a function that is extremely attractive in highly regulated Argentine and Venezuelan markets . It  allows to take credit card payments in which capital becomes Bitcoin automatically, whereby the trader always receive the virtual currency.

Having emerged from Boost Accelerator VC in Silicon Valley, this Startup is rapidly growing but it also faces the challenge of educating Latin American traders about the potential of Bitcoin as a currency which critics say it´s not yet proven.

However, with more than $ 600,000 in investment, the company promises high growth in 2015, and we will begin to see it implemented in more and more services and mobile stores throughout the coming year.