FIVE KEYS TO UNDERSTAND THE MOBILE MARKET IN LATIN AMERICA

With over 600 million people, economies increasingly booming and an infrastructure that improves daily, Latin America is one of the most promising markets for all kinds of industries over the coming decades. With penetration reaching 134% at the regional level, the cellular telephony has become an essential component of the economy of the twenty countries that compose the region, and the primary means of access to information and other critical services for their population. However, with its own culture and characteristics, Latin America has some peculiarities that are important to know before tackling a project in any of their countries.

In the last years, cell phones have become the main sources of Internet at regional level. In 2011 mobile connections exceeded the number of connections through fixed networks. This occurs for two reasons. On the one hand, there are major infrastructure problems in different countries of the region. Furthermore, the large expanses difficult the access to fixed networks in rural areas.

For these two reasons is that mobile networks have become the main gateway to the network in Latin America. Regionally, fixed broadband reaches about 20% of households. Even in countries with more developed infrastructure, such as Brazil and Argentina, where 60% of households have such connections, the penetration of this technology in low-income households barely reaches 8%.

Moreover, according to data from GSMA, with over 200 million users connecting via 3G networks and, in some cases, 4G, mobile Internet already has a penetration of 33% and is expected to reach 50% by 2020, numbers both today and projected to five years, exceed the world´s average. 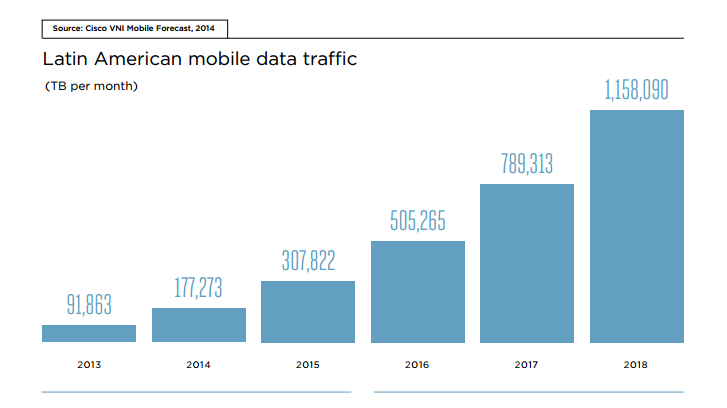 While Latin America is a region in itself, it is important to remember that there is great diversity among different countries in which the mobile industry is concerned. One of the easiest ways to identify variations has to do with the magnitude of each of the markets, due in part to the size of the population of each of them, but also by their socioeconomic characteristics. 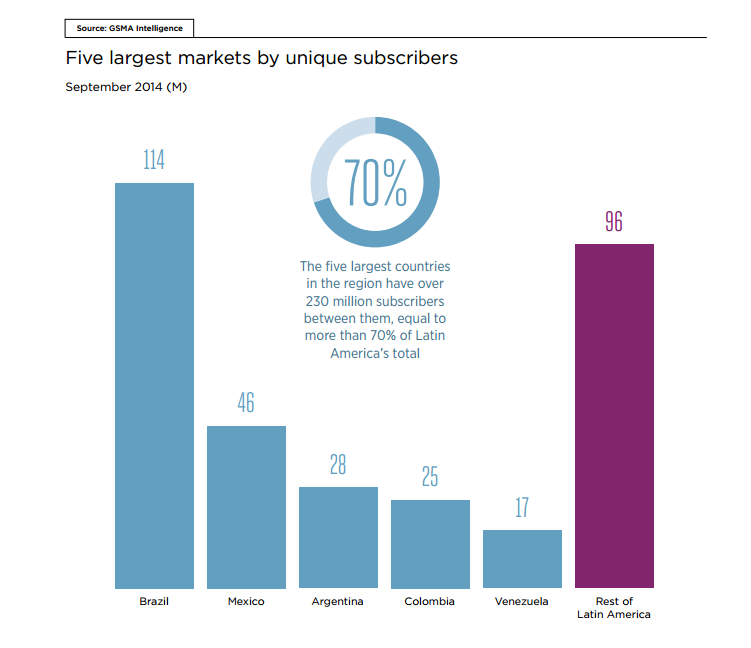 Thus, only five of the twenty countries that compose the region, represent 70% of the market. These are Brazil, Mexico, Argentina, Colombia and Venezuela, summing 230 million unique users. At the same time, many of these countries represent some of the highest rates of penetration of cellular telephony, in all cases greater than 95%.

These five countries also share other characteristics such as having the highest rates of smartphone adoption. These devices constitute 45.1% of the total in Venezuela, 32.4% in Brazil, 31.9% in Argentina, 26.9% in Colombia, and 17.9% in Mexico.

While competition is increasing in these countries, only two companies concentrate 71% of the market. It’s America Movil (Claro) and Telefonica, which operates with Movistar and Vivo brands.

Although prepaid connections constitute 80% of lines, Latin America is shaping up to be the second smartphone market globally.

However, as mentioned earlier, there is great diversity among different regional markets, prepaid connections are imposed in all countries of the region. Even in more developed markets such as Brazil, Argentina and Chile, the postpaid customers, those with a fixed monthly plan, reached in 2013 only 30% of the total. Anyway, it is held in all segments, the growth in smartphone´s sales, which, according to eMarketer, already represent 30% regionally, figure that will continue to grow thanks to the increasingly development on better phones in medium and low ranges .

The online messaging is replacing SMS

One of the keys to understand the breakthrough of data plans among mobile telephony users  in Latin America, lies in knowing their habits when communicating. One of the main incentives to adopt Internet connections on mobile phones has to do with the increasingly widespread social networks like Facebook use and, in particular, online messengers such as WhatsApp and Viber.

In fact, WhatsApp, the most popular service in the region, has a penetration of 75% in markets such as Argentina, and 67% in Mexico (88% if taken into account only smartphones). Such is the impact of these messengers that companies like Telefonica were affected in their revenues due to the fall in the use of SMS over recent years.

The mobile industry produces 4.1% of GDP at the regional level and generates more than one million jobs.

Finally, it is important to highlight the enormous impact that the mobile industry has on the regional economy. According to GSMA, the mobile industry generates about 242 billion dollars in Latin America, which directly contributes to 4.1% of GDP. At the same time, generates more than one million direct jobs and allows, thanks to its infrastructure, allows other industries to develop such as electronic commerce, which already sees 4.8% of their transactions through cell phones, one rising figure that will continue to grow if we consider that, according to Amazon, Latin America has become the second largest market in terms of online retail expansion after China.

Another market that is greatly benefited by the growth of connectivity is the mobile applications and content created for these devices. Although, according to ComScore, the most popular applications in the region are social networks and free messengers, they generate revenue through the publish, and mobile gaming industry which by itself in 2013 generated more than $400 million billing regionally.

As can be seen, the market for our region is constantly expanding and going through a paradigm shift that will lead to a traditional model to a service based primarily on data. Mobile phones, are the main way to connect to the network and communicate among Latin Americans.